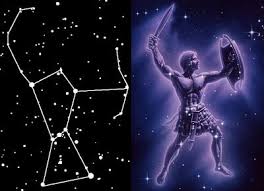 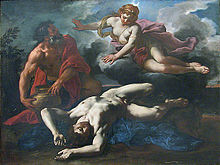 Orion was a huge and beautiful giant whose parents were Poseidon and Euryale. He fell in love with Merope and tried to marry her, but her father constantly denied this permission, so one day Orion tried to take her by force. As punishment, Merope's father, with the help of Dionysus, managed to lull him to sleep and blind him.

Orion went to an oracle to cure his blindness and this one told him that he would achieve it if traveling eastwards he allowed the rays of the sun to hit him directly in the eyes.
Recovering his sight, he moved to Crete and began to work in the retinue of Artemis, goddess of the Hunt, because he was a magnificent hunter.
From this point, there are multiple and very different versions of the end of Orion's life. The explanation of two different endings:

1. Orion, full of pride and protected by the goddess, dared to affirm that none of the great beasts and monsters existing in the world scared him and that he could destroy all of them. Gaea, the goddess of the Earth, felt hurt by such statements and sent him a simple scorpion that caused his death.

2. Another legend states that Apollo, Artemis's twin brother, was outraged that his sister loved such a giant and challenged her to hit a small figure with a bow and arrow, which stood out in a place far removed from where they were. Artemis hit the target as a great hunter that she was but that target was Orion, who died instantly. Artemis, heartbroken by the loss, asked Zeus to be transferred to heaven and turned into a constellation.