Open stars clusters are collections of stars with similar ages, chemical compositions, and distances from the Sun. These qualities make open clusters important cosmic laboratories for studies of fundamental astrophysics such as: the formation of stars, stellar evolution, dynamical interactions between stars, and the chemical and dynamical evolution and structure of the disk of our Galaxy. Nearby open clusters play a key role in calibrating our measure of cosmic distances. 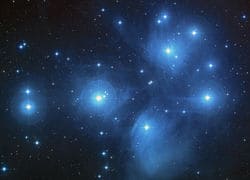 Open clusters are strongly concentrated close to the galactic plane where they form from cold dense clouds of molecular gas and dust. There are over 1,000 known open clusters in our galaxy, but the actual number may be up to ten times higher. The number of stars in open clusters, typically from hundreds to a few thousands, make them only loosly bound by gravity and thus vulnerable to dynamical disruption in the dense traffic of the galactic disk. Accordingly, most open clusters are younger than a few hundred million years, and older clusters are preferentially found at greater distances from the galactic center.