What is a supernova?

An exploding star that releases a large amount of energy. It is manifested by a notable increase in the intensity of the brightness or by its appearance at a point in apparently empty space.

A star explodes because the fuel that generates energy in the core of the star runs out and, therefore, the radiation pressure that prevents the collapse of the star runs out, the star yields to gravity, giving rise to stellar debris that They are not stable in the face of the gravity that does not stop. In the end everything is a question of fuel, without it the star cannot continue to shine.

Type I: They are those that do not show emission lines typical of hydrogen during the evolution of its brightness.

- Type Ia: they show a deep absorption line for silicon,  (6200Å/615nm). When its brightness approaches its maximum. Later, its spectrum becomes dominated by iron and cobalt lines.

-Type Ib: they do not show the SiII line, but they do show other lines of neutral helium (He) that do not appear, or are very faint, in Ia supernovae. Later, the emission lines of a multitude of elements of intermediate mass, such as oxygen or calcium, become very visible.

-Type Ic: they show neither the SiII line, nor the neutral helium line throughout the evolution of its brightness. Like the type Ib, these supernovae also show emission lines of intermediate mass elements over time.
Type II:  are those that show hydrogen-specific spectral lines in their spectra.
- Type IIp: The light curves of these explosions are characterized by maintaining a very constant level of brightness after maximum, beginning to decay after a plateau interval of a few months.
-Type IIL: The light curves in these cases are similar to those of type I, although the drop in brightness after the maximum is more abrupt.
-Type IIn: they are characterized by additional narrow spectral lines produced in a dense layer of circumstellar material.
. 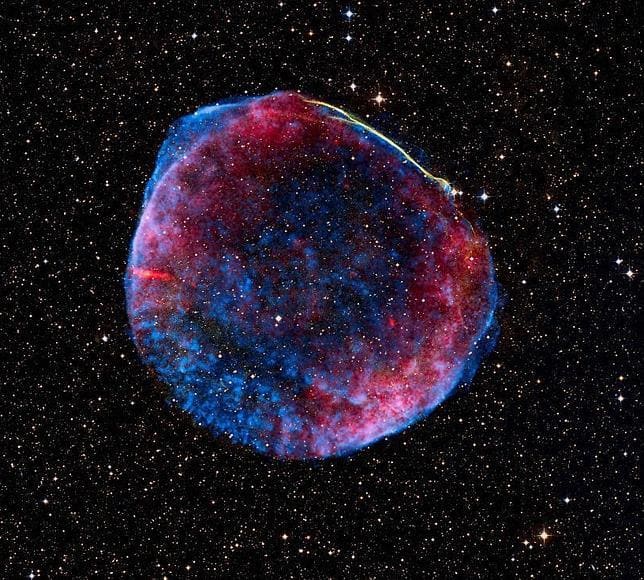